I had the opportunity to present at this year’s University of Scouting (Pine Tree Council, 2015) on Ham Radio. The class was well attended and there was a wealth of information to share – not all of which could be done in the short hour we had allocated to us. The attendees were mostly unlicensed Scouts and adults looking to understand what would be involved in earning the Radio Merit Badge and becoming a licensed Ham.

There are many aspects of Amateur Radio (Ham Radio) and we won’t be able to cover them all here either – this is just a summary and recap of the presentation. With that in mind, lets jump right in. 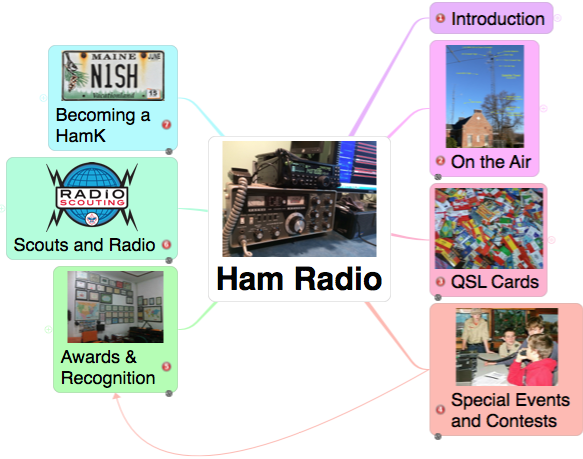 You can see the full Mind Map of the presentation by clicking on the summary image.

Go listen to some morse code. Really. Listen to it. Can you make out the dots and dashes? Notice how you can hear it even when there’s a lot of noise. Notice how well those dots and dashes cut through nearly anything. Continuous Wave (CW) is mighty good at working in the most undesirable situations. There’s a reason it has hung around for so long and now you know why, it works!

Ham Radio is not about morse code though, it is much more. In fact morse code is not even required anymore to get a Ham License. There’s only a multiple choice exam, given by other volunteers. Sounds a lot like Scouting doesn’t it, volunteers. There’s even achievements, recognition, membership cards, and badges (patches)!

Getting on the air is really the purpose of ham radio. It’s like the putting the “out” in scOUTing. It’s the thing, the purpose. At the start you listened to some morse code. Along with code, there are numerous other ways to communicate over the air; voice, video, and data.

Voice, or phone as some call it, is what you would expect, people talking. There are a few ways to communicate voice or sounds, two you may already know; AM and FM. These are the same technologies that your regular radios use. They are, however, a bit inefficient with use of the radio waves. To get more people talking in the same space we can use single side band (SSB). SSB is effectively half of an AM signal. This half of the signal is enough for us to understand what’s being said. It also gives a distinct sound to the conversations that you’ll likely not hear anywhere else.

There’s plenty of data going over the air as well. In fact there are many networks similar to the Internet that work without the land-based lines the Internet runs on. The long history and variety of digital modes is quite a bit more than we can go into here, suffice to say that much of the modern Internet has it’s roots in how hams have used digital over the air.

Moving away from communication modes, ham radio also gives us the ability to communicate to folks locally and quite far away. One of my first DX (distant) communications was from a mountain ridge in Maine to New Zealand. Today’s Internet may make this seem like a trivial contact, as with it we can talk to anyone, anywhere, nearly anytime. With radio however, these windows that allow us to talk to different places move during the day, night, and with the solar cycles. So talking to someone in New Zealand from Maine might only be possible for an hour right around dusk. There’s much more of a challenge to it.

When we put this distant communication in the context of Scouting we can easily see where the Eagle required merit badge Citizenship in the World can factor in. One of the requirements is to talk to a scout in another country about scouting. Wouldn’t it be fun to do that on a random contact by radio where you both share in the excitement!

After you’ve talked to a few folks around the world, you might want to keep a log to remember what you’ve done. Logs aren’t required anymore, though many hams, myself included, still keep them. In addition, you can send and request QSL cards from people you have made contact with. These QSL cards look like a postcard and have on them the details of your contact. Things like callsigns, time, date, frequency, and how good (or bad) your signal was.

Many hams take pride in a well designed QSL card and include photos of their station, their loved ones, or just some fun radio related items. Some cards that are sought after are from special event stations and locations. A few recent ones I received commemorated Veterans Day in the US and Christmas in Finland. The variety of cards and locations you can get them from makes for a very fun collection. And, again, if you’re of the Scouting mind, you can use them to work on your Collecting merit badge.

The one I’ve found the most fun is the annual Field Day. Field Day is held worldwide in June each year and is intended to practice emergency preparedness for ham operators. By utilizing emergency power, typically outside their regular operating locations, hams try to make as many contacts in 24-hours with others doing the same, as they can. The goal is to demonstrate they are ready to operate and exchange critical information during an emergency. Conveniently, scouts can also use parts of this in relation to their Emergency Preparedness merit badge work.

Field day is only one of the many special events. One geared directly towards scouting is the annual Jamboree On The Air (JOTA) held each October. This event is, like field day, a contest to get as many contacts as you can in 24-hours. Here though the goal is to make contacts with scouts! Along with all the contacts you can make there’s even a patch you can get.

QSL cards and patches for ham radio are only two of the types of recognition for special events and contests. Some hams take pride in contacting all 50 of the United States to earn their Worked All States (WAS) award. Others feel the DX Century Club (DXCC) is the primer award for working 100 distinct countries. There are numerous other awards and endorsements that a ham can earn. These include working all “zones” as defined by the International Telecommunications Union, working all the European countries, all the Canadian provinces, and many, many more.

There are a lot of aspects of ham radio that relate to Scouting and Scout merit badges, none is as direct as the Radio merit badge. It specifically has amateur radio as one of it’s completion paths. Learning and understanding ham radio is a requirement of that path. The merit badge is not the only connection. There is an Amateur Radio Operator shoulder patch, that can be worn by any licensed ham, and a Morse Code interpreter strip, that can be worn by any Scout or Scouter who demonstrates proficiency in Morse Code. Beyond those two the Boy Scouts of America recognizes the American Radio Relay League (ARRL) as a community organization and offers an award (and knot) for those who make “…a significant contribution to providing Scouts with a memorable and valuable Amateur Radio experience.”

One of these memorable experiences is the special amateur radio station, K2BSA, that scouts and scouters can contact on the air and get a special QSL card. Even more exciting is that you can operate K2BSA. Then you are the special event!

Becoming a ham is easier than ever. There’s no Morse Code requirement, it was phased out years ago. There are three levels of license in the Amateur Radio Service; technician, general, and amateur extra. Each level has an examination that is administered by volunteers, certified by a volunteer examiner coordinator. The ARRL is one such coordinator. The exams are open to all and offered at various times across the country.

The exams themselves are straightforward. The questions and answers are public and published for all to read and review. They cover general technical (electronics and radio) knowledge, operating procedures, and regulations (where you can transmit). Weighing in at 30 questions for the Technician with only 26 correct required to pass you could easily be on your way to your first license in a few days of studying.

When you get there, to your first license, there’s a lot you can do. So go, get out there, get on the air. Enjoy, talk, collect, prepare, get the certificates, the patches. Most importantly though, have fun!