Book notes from The Art Of Memory by Frances A Yates 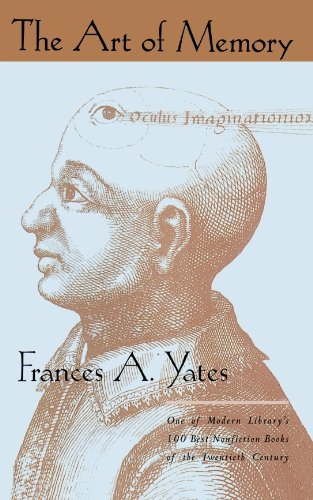 You have 20 highlighted passages

“Noting that it was through his memory of the places at which the guests had been sitting that he had been able to identify the bodies, he realized that orderly arrangement is essential for good memory.”

“order to form a series of places in memory, he says, a building is to be remembered, as spacious and varied a one as possible, the forecourt, the living room, bedrooms, and parlours, not omitting statues and other ornaments with which the rooms are decorated.”

“Cicero emphasizes that Simonides’ invention of the art of memory rested, not only on his discovery of the importance of order for memory, but also on the discovery that the sense of sight is the strongest of all the senses.”

“There are two kinds of memory, he continues, one natural, the other artificial. The natural memory is that which is engrafted in our minds, born simultaneously with thought. The artificial memory is a memory strengthened or confirmed by training. A good natural memory can be improved by this discipline and persons less well endowed can have their weak memories improved by the art.”

“The artificial memory is established from places and images”

“A locus is a place easily grasped by the memory,”

“Images are forms, marks or simulacra of what we wish to remember.”

“The art of memory is like an inner writing. Those who know the letters of the alphabet can write down what is dictated to them and read out what they have written. Likewise those who have learned mnemonics can set in places what they have heard and deliver it from memory. ‘For the places are very much like wax tablets or papyrus, the images like the letters, the arrangement and disposition of the images like the script, and the delivery is like the reading.”

“useful to give each fifth locus some distinguishing mark.”

“It is better to form one’s memory loci in a deserted and solitary place for crowds of passing people tend to weaken the impressions.”

“When we see in every day life things that are petty, ordinary, and banal, we generally fail to remember them, because the mind is not being stirred by anything novel or marvellous. But if we see or hear something exceptionally base, dishonourable, unusual, great, unbelievable, or ridiculous, that we are likely to remember for a long time.”

“Thus nature shows that she is not aroused by the common ordinary event, but is moved by a new or striking occurrence. Let art, then, imitate nature, find what she desires, and follow as she directs. For in invention nature is never last, education never first; rather the beginnings of things arise from natural talent, and the ends are reached by discipline.”

“We all know how, when groping in memory for a word or a name, some quite absurd and random association, something which has ‘stuck’ in the memory, will help us to dredge it up. The classical art is systematizing that process.”

“‘One must employ a large number of places which must be well-lighted, clearly set out in order, at moderate intervals apart, and images which are active, which are sharply defined, unusual, and which have the power of speedily encountering and penetrating the mind.”